Developing your Pharmacy career in a private setting

Lynda joined the Pharmacy team at HCA UK over 10 years ago and has since gone on to develop both personally, and professionally. Here she talks about her journey from Deputy Pharmacy Manager to Head of Outpatient and Pharmacy Services. 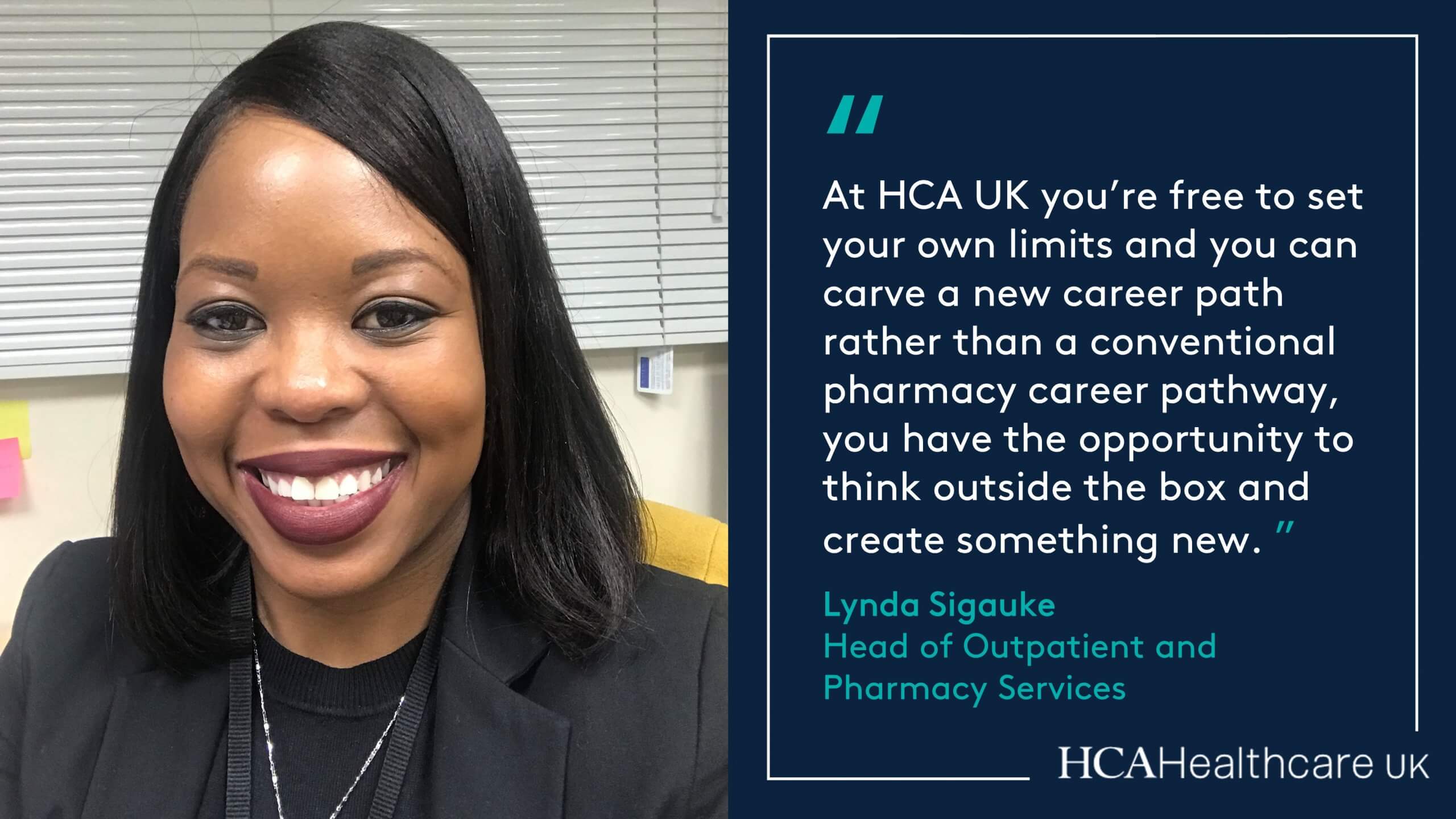 So tell us a bit about yourself?

I started at HCA Healthcare UK just over 10 years ago now. I was working as a Locum Pharmacist before I joined  and to be honest, it wasn’t a planned move. I got a call out of the blue from a recruiter and was brought in for an informal interview, then received an offer before I even got home.

Since then, I’ve gone on to progress into a variety of roles at The Lister Hospital, part of HCA UK, here in London, while completing courses to further my personal development. Looking back, I’m so glad I made the move as I feel I’ve grown so much as a person.

How have you progressed your career at HCA UK?

It’s been a bit of a whirlwind actually, but in a good way. Within a year of joining as a Deputy Pharmacy Manager I’d enrolled on the (Institute of Leadership and Management (ILM) course before being promoted to Acting Pharmacy Manager  to cover maternity leave, later moving into the post as a permanent role. This opportunity gave me more exposure to the behind-the-scenes operation, including pharmacy strategy planning, finance reporting and recruitment. The nice thing about working at HCA UK is that as a leader, I never felt alone, as my peers at our other HCA UK facilities were always on hand to offer advice and support when I needed it.

Having successfully completed the ILM course, I then went on to study for my Prince 2 qualification, which was also funded by HCA UK. I think that’s one of the reasons I’ve stayed so long, that focus on personal development has always been crucial to me. I also ensure that everyone in any of my teams has access to post graduate-studies since joining HCA UK.

After a while, having completed quite a lot in a short space of time, I started to outgrow my role so as part of my appraisal process within the organisation, together with my line manager, I was able to set some personal development objectives and one which had been a long-standing objective was to complete an MBA. It so happened that HCA UK and Bayes University, (formerly known as CASS Business School) had formed a partnership and the opportunity was offered to me to enrol on an executive MBA. Getting the chance to study at this level, fully funded and supported by HCA UK was a dream of mine and for that I’ll forever be indebted to the organisation for such an opportunity. The best thing I ever did!

Alongside my studies, my line manager also recognised I needed an extra challenge in my day job, and that’s how I ended up here as Head of Outpatient and Pharmacy Services looking after a team of 36 across 3 departments and 4 sites. It’s been yet another big leap, but I’m loving the growth and the person I have become as a result of the challenges.  I love the fact that I have a mentor in my line manager, and she won’t let me settle, always pushing me to be the best I can be in my career.

What would you say to anyone looking to develop their career in Pharmacy at HCA UK?

I’d say there’s a lot more you can do than you might think. Team wise, it’s such a big team when you think about how many facilities and pharmacies HCA UK has, and there’s always opportunities for growth, development and extra learning. How fast you can progress is really up to you. You have the flexibility to move sites across the wider HCA UK network to help broaden your skillset and reach that next level. At HCA UK you’re free to set your own limits and you can carve a new career path rather than a conventional pharmacy career pathway, you have the opportunity to think outside the box and create something new.

Looking back over your time here, do you have any stand out moments?

I have many to be honest, but the one that comes to mind is the Christmas period. At HCA UK, we’re great at celebrating each other’s achievements throughout the year but I’d say even more so over the holidays. Even during the pandemic when we all couldn’t come together to have our usual Christmas parties, we got vouchers to go and spend on ourselves and the site went above and beyond to recognise the work of our colleagues. It’s really hard to just pick out one memory though, there’s always this family feel, that we’re all working together, not only to deliver for our patients, but for each other as well.

Are you working in Pharmacy and looking for a new role where you can grow and develop just like Lynda did?